LionSky Media was selected to develop a Microsoft Visual Studio .NET 2003 software solution for controlling the KC-10 Boom Operator Simulator. The Instructor Operator Station or IOS, was used to control the state-of-the-art visual system to change models for re-fueling, change time-of-day settings and cloud and terrain settings. The IOS also controlled Malfunction setting and clearing for Systems Malfunctions to bad Circuit breakers to mission critical scenarios. There is an external non-compile scenario builder, control over serial port control of the projection system, control and status settings of the visual, host and control loading systems computers. The United States Air Force has long used aerial-refueling simulators to train and certify KC-10 Extender refueling boom operators. The simulators, known as the Boom Operator Trainers or BOT, have received a wide range of independent upgrades and modifications to keep the trainer operational and effective. Although the trainer remained functional with the upgrades, the basic obsolescence of the trainer’s technology was not addressed and over time, the simulator suffered from supportability issues. In addition, a large recent effort to update the system with high fidelity models of selected receiver aircraft to regain certifiable performance did not achieve the intended utility for actual training use. The compounded problems of supportability and sub-par fidelity decreased the inherent value of the simulator and a change was crucial. 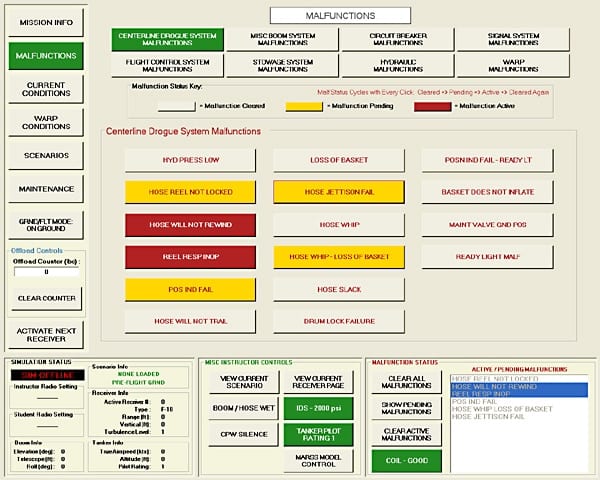 The Air Force selected the expertise at ACME Worldwide Inc to design and perform the modifications to rejuvenate the BOT trainer. LionSky Media was sub-contracted to develop the Instructor Operating System and aide in configuring the dynamic hooks for the Host to control the new visual models. LionSky also developed and performed training for the Boeing Maintenance personnel at the base sites of Travis AFB, CA and McGuire AFB, NJ for IOS and Visual Model Modification and Maintenance. Stand-alone version were created to train the many instructors at their own PCs before entering into the simulator and also a tradeshow version that had PCI card controlled stick configurations and cockpit status indicators and lights.